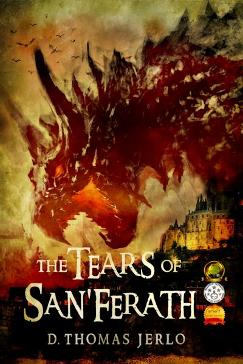 Allanoria is shifting into a new age—a world without mage’ic. For reasons unknown, I sense this is a passing phase, and that one day the land’s mage’ic will return. San’Ferath readies to succumb to my final spell, The Undying Sleep. Invoking such power shall end my life, but I go willingly, as does he, for when the need is great...so shall he wake.

This book delivers on what the cover promises. You know who's good when you're going in--and who's bad. That doesn't make the comeuppance any less satisfying. If you like high fantasy (with a little bit of romance), but want a quicker read with a cast of characters that doesn't require a playbill and a glossary, pick up The Tears of San'Ferath. ~ NBReads, Amazon Review

This was a great high fantasy read. It had all the classic fantasy elements woven into an original story line. The thing that I liked best was the way I became emotionally involved with the characters. They were so well drawn out and so very believable. I admire any author that can create such colourful characters out of thin air and make the reader actually care for these people. This book made me laugh a lot, especially at the medieval cursing, and it also brought a tear to my eye. Very well done!  ~ Kurt Chambers, Amazon Review

The Tears of San'Ferath kept me reading late into the night simply because I just had to know how this story was going to turn out. D. Thomas Jerlo has created a world with the potential to become a fantasy classic. I like the premise that the world moves in and out of magical phases. I like the potential for both good and evil to gain the upper hand during a shift in phase. This is a formula for epic conflict and D. Thomas Jerlo utilizes the full potential of this. Great characters, a great plot and setting, and just as important, a very believable world. ~  Ray Simmons, Readers' Favorite

Anea gawked at the fourteen images that had started out as nothing more than wavy mirages. When each one solidified, she knew for sure she’d lost her mind. She’d heard the fairy tales, but they didn’t come close to what she saw before her.

Fourteen dragons hovered over each pyre of ash, one more magnificent than the other. With each breath she took, the more detailed the creatures became. She pinched herself just to make sure she wasn’t dreaming. Ouch!

Dragon scales in every array of shimmering colors glittered under the night sky. Multifaceted eyes regarded her with quiet curiosity. She should have been frightened, but all she felt was utter awe.

The most striking dragon of all floated closer. Like whiffs of smoke caught in a breeze, the others faded away.

Anea craned her neck up to see that hidden beneath the folded plates of gleaming emerald and dazzling silver, the dragon’s skin was dark amethyst. The shield rippled like water caught in sunlight. She yearned to touch the strange armor. This can’t be real!

She estimated that from its elongated head to the tip of its arrowhead tail, the dragon had to be about a hundred feet long and almost six stories tall. Next to it, Anea was no bigger than a pepper­drop that could get caught between its teeth.

This has to be a dream.

There was a distinct feminine quality in its movements and the graceful lines of the dragon’s body. Anea knew without a doubt it was female. The feet at the back had four razor-sharp claws that were similar to the ones in front, except those were thinner, longer, more like fingers. Limpid, copper-faceted eyes filled with intellect studied her just as studiously back. But it was the emotion in them that seared straight into her soul. She dared to lift her arm and skim a hand over the scaled knee. It was solid. Is this real?

The dragon opened her wings and created a canopy of silver-emerald above her head. The wing span was as wide as she was long. Opalescent as the scales, the wings looked like thinly shaved leather. She folded them back to her sides. Like the Kabolian, she mind-spoke. “You have come, Sacred Protector.”

“I have waited hundreds of years for you.”

“You possess the power.”

“What power? The Kabolians said the same thing. I have nothing but corns on my feet and a bad case of an overactive imagination.”

“We all serve a purpose in this world, human-child. Your path was predetermined many years ago, and your steps have stayed true. You have been chosen to be but one of the benedictions of these lands.”

“When the two of you came together, your powers restored that which had been lost. It is the meeting of fates.”

The dragon paused and glanced in Cethland’s direction. It was then Anea realized that he lay in the center of the clearing curled in a ball, unmoving.

“He is the fire. You are the flame quencher. Much will stand in your way. Burdens will come. They will go. Stay true to each other.”

Emotions that weren’t her own blew through her. Their intensity buckled her knees. She sobbed.

How could anyone survive such misery for that long?

“Find my San’Ferath. Release him from his sleep and bring him home to me. But beware. Evil has touched these lands first, and its arm has grown long. Find the Nongéva Druid and destroy him. Should you fail, dark days and evil times will consume not just Allanoria, but the world.”

When the dragon began to fade from sight, Anea jumped to her feet. “Who’s San’Ferath? What’s a Nongéva Druid? Wait! Don’t leave.”

“You are Az’Chan’s strength. And his sanity. Do not leave him in his hour of need.”

Then that recognizable blackness crept into the corners of her eyes. This habit of fainting was beginning to annoy the bejittles out of her. With everything she had, she tried to force it back. “Don’t leave! You have to answer my questions. Please don’t leave.” Darkness came, but a final message lingered long after the dragon left.

“Love, respect, and duty. Those are the powers that will change this world.”